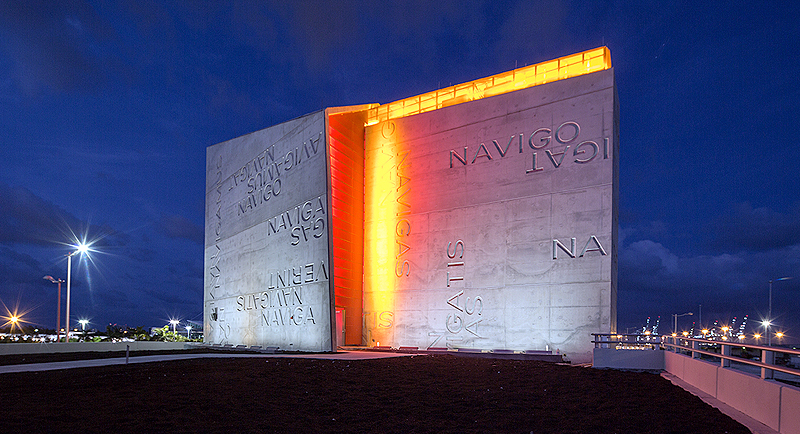 The Personality of the Port!

When architect Robert Lloyd envisioned the Port Miami Tunnel Project he specified extreme detail as to the choice of the materials, the skin of the structure and the feel of a building that would become both dynamic and forever memorable.

The Port Miami Tunnel Project provides direct access between the seaport and major highways, thus creating an additional entry to Port Miami and greatly improving traffic flow to downtown Miami.  All steps of the project were intentionally designed to aid ongoing and future development in this large multi cultural community.

The scope of the Port Miami Tunnel Project was both a structural and visual challenge.  Several factors had to be considered prior to and throughout the project:

The goal of the architect was to make the large elevated steel structure and concrete infrastructure structurally sound while visually lightening its weighty nature.

Since the structure was to be highly visible during the day and night, there was a desire for the metal cladding on the roof of the building to change its appearance depending on light conditions.

As a roofing material, the metal chosen for the mesh spanning the concrete structure must withstand changing weather conditions and endure through time.

To Achieve the Perfect Result

Multiple variations of mesh were considered and auditioned by placing samples on nearby roofs to gauge the effects of day and night lighting.

Working closely with the architects on the exact size and shape of the openings in the metalwork. Spantek customized a product perfectly matching strength of structure with the desired aesthetics.

Based on specifications, Spantek developed a powdered coated aluminum screen that would withstand nature’s elements, and whose orange color provides a recognizable structure during the day, and a glowing backlit piece of art during the night. (This coating proved so successful at the Port Miami Tunnel Project that other applications of the product are being considered).

Spantek was also able to develop close relationships with local fabricators due to a contact they previously had with Jim Kane, (add title and his connection with Spantek or Port of Miami). This further enhanced the economics of the Miami community and enabled samples to be produced locally, thus contributing to lower costs and faster turn around times.

“Spantek was able to demonstrate their willingness to work with our team in accomplishing the architect’s vision.  Their performance on the Port Miami Tunnel project confirmed knowledge of their product and provided us with local industrial contacts that we could work with to get the job done right. The result was a great confidence in their ability to work within any architectural venue and certainly ensured that our project will be seen as a cultural icon and contribute to Port Miami’s economy”